Do you believe this sentence: Everybody is a freedom fighter? I am on the fence.Not everybody fights for freedom by birth or is it their genuine duty. But people say  one certainly becomes  freedom fighter just after the so called MARRIAGE. Since  i am still not married i really don't know the facts behind it but  I have heard so many people(may be some exceptions) frequently complaining about their life after the marriage.

I have no intention to play a blame game but the fact is just after the marriage you are tethered and suddenly a boundary is being  created. Every thing is set to limitations. For instance a wife certainly doubts if her husband comes very late or if he is with some gorgeous women not even thinking that she might be his coworker or childhood friend. Like wise the  husband's eye and ear certainly becomes active if he sees or hears her wife being involved in some awkward  activities.  If we  see a couple walking down the street who might have ever thought and said  like s/he is walking  happily with sis/bro in that street? I am very sure there will be  very few who thinks like this.  Some say life is very beautiful and wonderful after the marriage which may be true for those who really know and understand  about this significant life step- the MARRIAGE, while  there are still  majority of others who prefer to say just the contrary.

I do believe that marriage is the most significant life step  that a couple can take but at the same time there are aslo so many risks involved in it which might prove to become a barrier to this path and it is these risk that make people a freedom fighter. A couple may enjoy a very momentous and enriching life immediately after or before marriage but most couple complains that this does not last so long.This is being proved through headlines of various  news channels and papers  where a husband/wife appeals court or injustice being given to the individuals. There are so many divorce cases too which is a real indication of wanting to be free from that web of marriage.

Finally  what i think  is Marriage is very serious matter in one's life. It is worth more than mere bottles of Ara and mere enjoyment for a moment. It is a life long commitment that should not be taken lightly. To become freedom fighter or enjoy freedom is solely on  the individual's hand. Remember:
Marriage is an alliance entered into by a man who can't sleep with the window shut, and a woman who can't sleep with the window open.  ~George Bernard Shaw 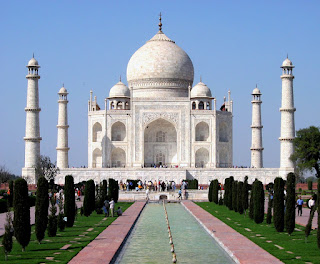 I never thought that i will get the chance to visit this site- the world's one of the seven wonders. i am not proud because i reached there but because i have got to interact with many good friends. I never realize the value of friendship till now. Yeah friends  are not merely being together. it is really more than being together, more than sharing the scheduled His and Hellos.It is more than mere sms through mobiles.
It was not even a month that we reached to the institute. we are already late by about two months and by the time we reached here it was time for the mid semester break! for ten days. Shall we visit Taj-mahal? was the what my seniors suggested and before i realized, we were enjoying the beauties of tajmahal and other monuments like Agra Fort, and Fatiapur city where there is the resident of king Akbar- the great. i know those days are gone but memories shall never die.The moments like some vendors and  condors fooling us with fake statues to be taken as a gift,Auto drivers fighting for their customers and common people leading us as a guide(which they were even not familiar) will never vanish.But the most cherishing moments were the unity we have shown as a small family. we really value our togetherness and helps to each other.
As a student for the first time venturing outside really learns a lot. Accustomed to our own culture tradition and adaptation, coping up with the different culture is really hard. on top of that the hot climate with temperatures soaring to 45 degree centigrade during simmer and below 8 degree centigrade during winters
are what makes us totally unaware of what is going to happen. But in midst of all these if there are someone to console, someone to tell that nothing is going to happen,it really means a lot.
More than the visit of this site what lingers in my mind are the journey we took, the moments we spent there and the moments we share as a friends. Friends really mean a lot to me ... Thank triple gem for giving me friends like them......
at May 20, 2010 No comments:

Today is my third day after tiring and exhausting days of exams only to know that the results are no more than horrible! Fine its the way of life that there are no success without failure and no failure without success. failures are but lessons teaching us to open new window and new doors Never in my life i thought that college life and student life is different! This is a piece of my view: NEVER POSTPONE SOMETHING TO THE LATER PART OF YOUR LIFE, BECAUSE THE LATER PART OF YOUR LIFE IS GOING TO BE MORE CHALLENGING THAN THE PRESENT. BETTER RACE WITH THE TIME AND NEVER REGRET IN THE LATER PART OF YOUR LIFE.........some how i have completed my first year of my professional course and i don't know what i really learned from this long 360 days. but i am firmly faithful because i know there are always someone who is looking beyond us from somewhere and closely judging us.what am i going to do now? Just relax because all is doing to be well and fine......... just keep up my own status......
at May 19, 2010 No comments:

Is life ruled by silent hands of chance?
Or by powerful fist of choice?
Spare a little leisure to make a glance
That unbalanced ups and downs
Gain and success being ruled by failure
Special moments blurred and spoiled by regrets
well tendered plans pressed by pressure
And hearty heart hunted by hungry hurt
yet life is so lively with only lessons
Wounds are warranted to turn wisdom
While stumbling blocks are stepping stones
Only struggles bring strength and freedom
This is but a tapestry of life
As you life a day you live the life

Email ThisBlogThis!Share to TwitterShare to FacebookShare to Pinterest
Labels: Poem

It was best of days we spent together
Environment was so serene, calm and clear
Birds did chirpined their melodies song
It was all fine and nothing wrong
Presence itself was so lively and enchanting
Words of our conversation was echoing
And the days and nights were so short
For she was aside with for any sort
But when all was said and done
She bid a big farewell and left me all alone