Today is a big day for all Buddhists around the earth, it is the descending day of Lord Buddha, Lhabab Duchen, one of the four major holiday on Buddhist calender. The day is celebrated on 22nd of the ninth lunar month of Bhutanese calender, and the day marks the Buddha's descent from the heaven of Thirty-Three Trayastrimsa (སུམ་བཅ་རྩ་སུམ) where he went to give teachings, to repay the kindness of his mother in particular who died a week after he was born in Lumbini, modern day Nepal and was reborn there. His descent from the Heaven takes place at Sankashya in modern Uttar Pradesh, India. Get more details from http://bhutanjournals.com/history-culture-tradition/buddhism/lhabab-duchen-the-day-buddha-descended-from-tushita-heavens/ 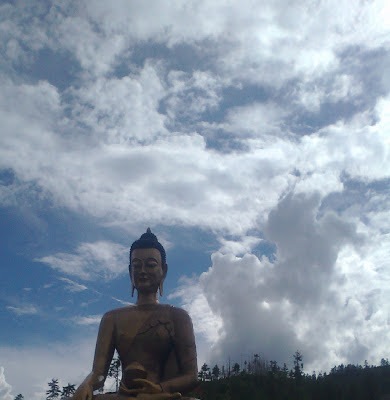 Today is also the pedestrian day in Bhutan, a move that received a mixed response from public individuals. Bhutan government  passed a order declaring all Tuesdays as pedestrian day throughout the country, starting June 5- The World Environmental Day.
Perhaps today is the only Pedestrian day liked  and received with a sense of smile by the mass Bhutanese unlike the other pedestrian days.(Tuesdays) as they walk from home to temples and monasteries to offer prayers. Or perhaps only Lhabab Duchen day, when the temples and monasteries receive less number of  devotees than usual, by the mere fact that people have to walk.

As a student away from the motherland, although it is holiday (due to some college functions) today, neither did I walk nor is there temple around to visit and pray. As usual, I woke up at 7:00 PM (IST) offered Choeopa (water offering) and recited some prayers. I am also into the end of the book by Jamyang Khyentse Rinpoche titled "What makes you not Buddhist"
at November 06, 2012