How Dirty the Politics Can Be? 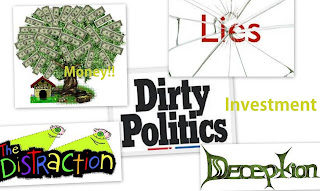 Successful now; a chair he get of his own
He forgets the smiles and the hope he imparted
As some people change with chair, so is he
He becomes greedy and self-centered instead

Like the oxen that looks back to how much is plowed
He rewinds every bit of change to his credit
For another term, he demands or even beg
And now power, perks and purse is the sole weapon
In luring to his another sophisticated chair
A chair, that will comfort only him self
And rot the floor that supports and suffer.

Email ThisBlogThis!Share to TwitterShare to FacebookShare to Pinterest
Labels: Politics